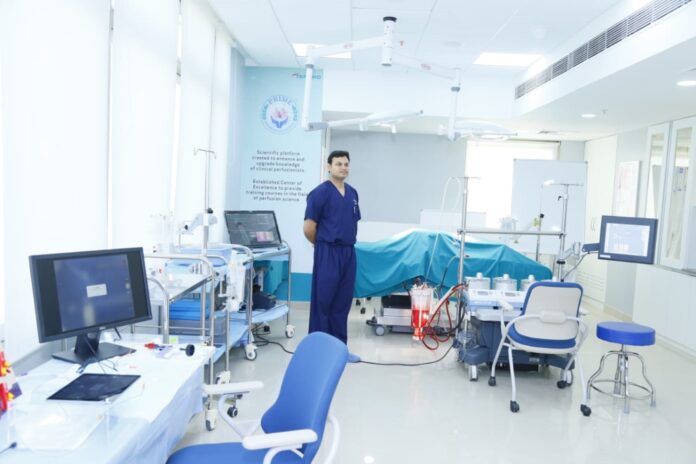 Terumo India, the Indian arm of Terumo Corporation, a global leader in medical technology, announced the launch of eTISL, a ‘phygital’ version of its initiative, Terumo India Skill Lab (TISL). Designed as a hybrid of physical and digital interfaces, eTISL aims to accelerate medical education for cardiovascular healthcare professionals (HCPs) in India. The new platform was inaugurated at a virtual event by the Charge d’affaires Embassy of Japan in India, Toshihide Ando, in the presence of the global president and chief executive officer of Terumo Corporation, Shinjiro Sato, president of Terumo’s Cardiac and Vascular Company, Toshi Osada, eminent physicians, and healthcare professionals, apart from other members of the Terumo leadership team.

Launched in 2018, the Terumo India Skill Lab (TISL) is equipped with state-of-the-art simulation training facilities, which provide doctors and medical technologists with virtual training of cardiovascular surgery and cardiac intervention. The eTISL platform complements this capability by allowing physicians and allied healthcare professionals the advantage of self-paced learning through a rich bank of meaningful resources, including live and recorded webinars, scientific presentations by clinical experts, interactive online resources, interdisciplinary compilations of journal articles, product demonstrations, in addition to patient resources.

Delivering his keynote address, Charge d’affaires, Embassy of Japan in India, Ando said, “I congratulate Terumo India for creating eTISL to scale-up its medical education reach and impact. I believe this launch of eTISL in this situation is timely, and is a new contribution to Indian society through healthcare. Also, it will lead to enhancing bilateral relationship between Japan and India.”

Coinciding with Terumo Corporation entering its hundredth year since inception, eTISL builds on the Terumo India Skill Lab’s journey and is a fitting tribute to an organization whose starting point and unchanging corporate mission has been ‘Contributing to Society through Healthcare.’ Over the past two years, TISL has delivered high-quality programs to over 7000 healthcare professionals (HCPs) through 175 faculty on diverse cardiovascular health topics. Now, the shift to a ‘phygital’ model will allow the initiative to increase its reach and impact exponentially, it said.

Speaking on occasion, Osada said, “One of the unique ways in which we at Terumo deliver value to our customers is by providing high quality and relevant medical education. With the range and depth of resources planned in eTISL, I have no doubt that it will be a valuable companion for cardiovascular healthcare professionals in India.”

According to the press statement, the TISL initiative was initially designed to develop further medical and clinical skills of healthcare professionals in India. The new realities post the COVID-19 pandemic accelerated its pivot to the digital platform.

Making the announcement, managing director of Terumo India, Shishir Agarwal, said, “On this World Heart Day, we dedicate the eTISL initiative to all cardiovascular healthcare professionals, who continue to serve patients with empathy and commitment despite the challenging times we are in.”

Speaking on occasion, regional representative for India and the Asia Pacific, and chairman of Terumo Asia Holdings, Probir Das said, “We feel very fortunate to be serving the community and advancing the standards of care through pioneering academic initiatives.”

Terumo India is a fast-growing medical device company that provides advanced access to high-quality cardiac and vascular and other medical devices to patients and medical practitioners in India. Terumo India is part of Terumo Corporation, a global medical technology leader with headquarters in Tokyo, Japan, and over 25,000 associates worldwide. Now in its 99th year since inception, Terumo’s starting point and unchanging corporate mission have been ‘Contributing to Society through Healthcare.’

Terumo India was established in 2013 with headquarters in Gurgaon, NCR Delhi, and has since grown to touch over 10000 lives each day, with an expanding field force & distribution network. The company runs several acclaimed academic programs, working closely with its customers and academic partners to contribute to India’s healthcare system’s skilling requirements.

Echaar Equipments at Pack Plus 2022