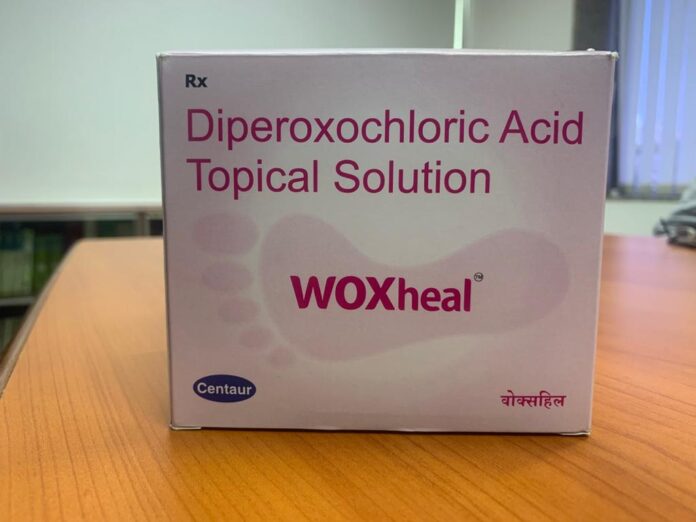 Centaur Pharmaceuticals announced the launch of a New Chemical Entity (NCE) – WOXheal. With its dual mechanism of action, WOXheal is a unique product in diabetic foot ulcer treatment. It will save millions of people with diabetes who have to undergo foot amputation globally.

WHO predicts that there will be ten crore Indians with diabetes in the next ten years. Amongst other complications of diabetes; diabetic foot ulcer is the most common complication seen in India. Apart from the fact that diabetic foot ulcers are non-healing, they hamper the Quality of life of the patient and lead to complications such as wet gangrene, cellulitis, abscess, and necrotizing fasciitis, all leading to a total or partial foot amputation. Data indicates that 25% of people with diabetes will develop a Diabetic Foot Ulcer in their lifetime. 1 in 5 Diabetics hospitalized due to severe foot infection undergo a foot amputation affecting the family’s livelihood.

Speaking on this occasion, S D Sawant, chairman and managing director of Centaur Pharmaceuticals, said, “We, at Centaur Pharmaceuticals were deeply concerned with the alarming rate of foot amputations in India, and wanted to discover a drug to prevent it. Fifteen years ago, we collaborated with CytoTools AG, Germany, who had this promising molecule for the treatment of diabetic foot ulcer. We are very happy to offer this ray of hope to people with diabetic foot ulcer in India.”

Randomized clinical trials conducted across India in over 15 clinical trial centers on WOXheal elucidated that over 90% of patients with non-healing diabetic foot ulcers showed a reduction in the size of the ulcer, and 75% out of these patients achieved complete healing within 6 to 8 weeks without any safety issue. The trial’s data and outcomes were submitted to the Indian Regulatory Authority, and a manufacturing and marketing approval was granted to Centaur Pharmaceuticals for WOXheal.

Dr Mark-Andre Freyberg, the co-innovator of WOXheal and the chief executive officer of CytoTools AG, Germany, said, “WOXheal has completed Phase III clinical trials in India and demonstrated rapid and effective wound healing in patients with Diabetic foot ulcers, a condition that is notoriously difficult to treat.”

Dr Dirk Kaiser, the co-innovator of WOXheal and the chief scientific officer of CytoTools AG, Germany, said, “WOXheal is a novel drug born out of Indo-German collaboration and it will change the way Diabetic Foot Ulcer management is done and will help prevent amputation.” Dr Kaiser also added that phase III clinical trials were ongoing in Europe, and the results from phase II clinical trials were similar to Indian clinical trials.

This pioneering effort by Centaur Pharmaceuticals, for an unmet medical need, enhances India’s stature as a self-reliant nation and a Pharma super-power. WOXheal will be readily available in the entire country by the end of the month.

BillerudKorsnäs FibreForm – tubes of paper instead of plastic